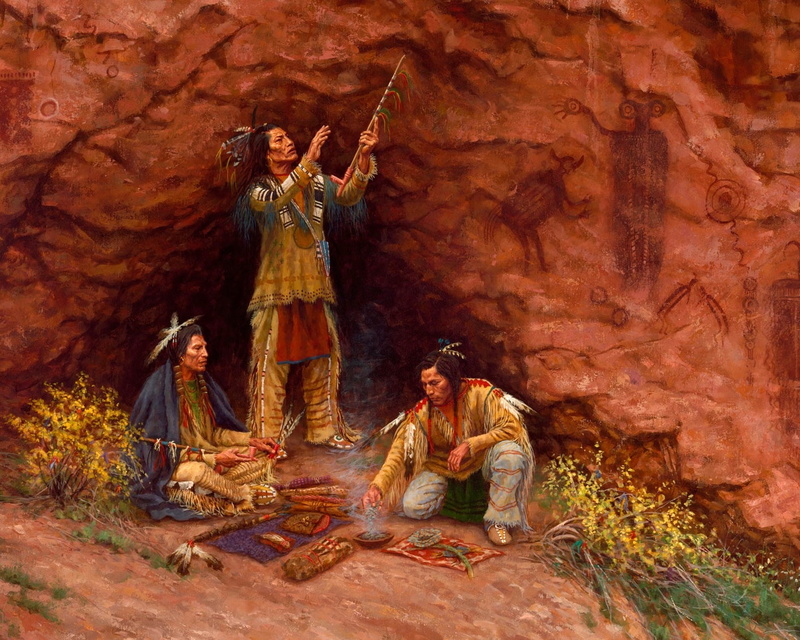 Whispers of the Anasazi

About "Whispers of the Anasazi"
Performing rites in a hallowed place, three Ute men visit a holy place where people have been conducting ceremonies for centuries. The canyon walls are adorned with the work of the ancients, those who left their mark behind long after their physical bodies passed from the Earth.
About the men and their accouterments
The Ute men in Whispers of the Anasazi have brought items of religious significance with them to the cave. While one points his pipe into the sky towards the Great Spirit, the other two prepare their sacred medicine bundles.
Medicine bundles were packages of spiritual items only to be opened during special occasions, such as during a ceremony such as this one. Many items could be found in these bundles, such as rattles, whole birds, feathers, animal skins, sweetgrass, sage, stones and other important objects.
They wear a variety of traditional garments, including buckskin shirts and leggings. The man on the left has a blue blanket over his shoulders and holds a ceremonial pipe in his hand. The standing man conducts the ceremony, pointing his pipe towards the sky. The man on the right prepares sage for burning to purify the air and carry prayers to the Great Spirit.
About the setting
Whispers of the Anasazi depicts an amalgam of topography typical in the Four Corners region. I like to think that this is a place that was known to the Ute of the time depicted (c. 1850-70) but is unknown by modern societies. In this way, I can give the viewer a glimpse into something private and special that is off the beaten path of today.
About the composition
The three Ute men form a triangle near the cave opening. They form a strong center and provide the focal point for the painting. The standing man's pipe helps guide the eye towards the paintings on the rock.
This painting is primarily composed of the red rocks. I enjoyed adding colorful contrasts to the background, as seen in the men's vibrant clothes and the plants around the base of the rocks. The blue, particularly, stands out strongly.
Inspiration for Whispers of the Anasazi
I have lived in the Southwest for decades and have hiked through countless red rocks areas similar to the one in this painting. I have wanted to create a painting like this for years both to show the beauty of the Western landscape and also to depict the continuum of cultures and people that would have lived here.
About the Ute and the Anasazi
Today, the Ute are associated primarily with Colorado, but historically, this tribe ranged from what is now New Mexico, Colorado, Utah, and Wyoming. After acquiring horses from the Pueblo Indians in the 1600s, the Ute engaged in a more nomadic way of life.
The Anasazi were prehistoric peoples who lived in North America from approximately 1000 BCE to 1500 CE along with similar cultures the Mogollon and the Hohokam. The Anasazi were known to have built large dwellings in recesses of canyon walls, otherwise known as cliff dwellings.