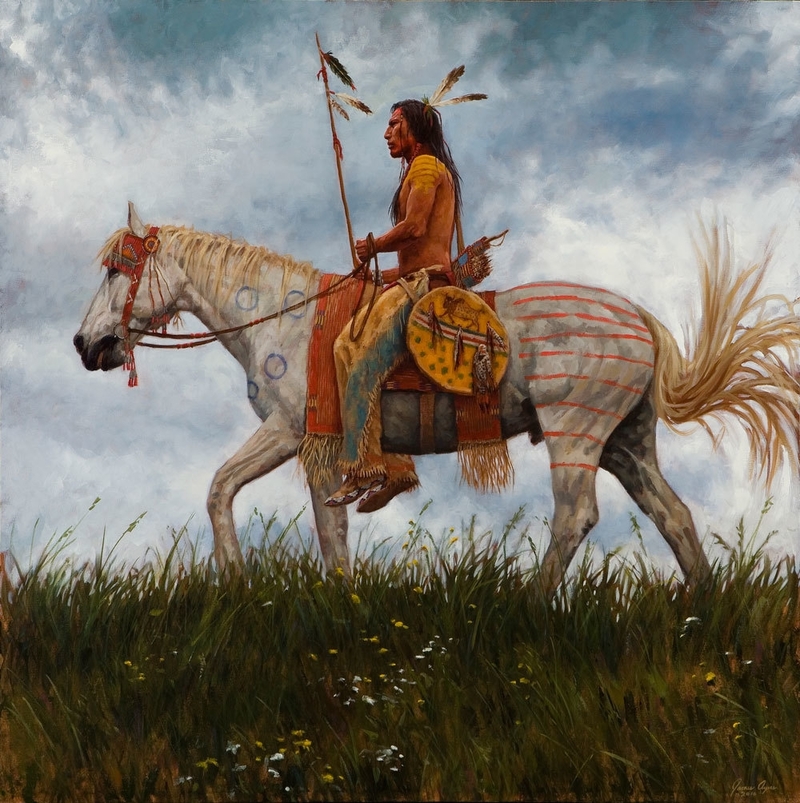 More about Lakota Horseman
The two go as one, vigilant for threats. They do not know what they will find, but they will face it together.
A Lakota man and his horse survey the land from high atop a ridge -- keeping watch for threats. For the Lakota, the relationship between warrior/hunter and his horse was an important one: the Lakota were renowned for their excellent horsemanship skills.
About the rider
The rider is portrayed with the traditional Lakota riding gear: only a bridle and a saddle blanket. Riding thus, with no saddle, took incredible athleticism and skill as the rider had nothing but his own strength to guide his horse and keep him riding.
Just in case he meets with trouble, the warrior has his bow and shield at the ready. The shield is adorned with a buffalo (for strength), a flicker woodpecker (for tenaciousness) and hail (to rain misfortune onto his enemies).
About the horse
The marks on the horseâ€™s rump are coup marks - notations of prestigious acts of bravery by the warrior. The circles on the front of the horse can mean multiple things, either instances in which the owner was fighting behind a parapet, battles in which enemies were killed, or even instances when the horse itself was injured.
Notice the horseâ€™s tail. He is swishing it, either to swat away flies or to communicate. Horses will often swish their tails as a way of saying â€œhelloâ€ to familiar faces. The inspiration for this particular swish came from the model horse; I wanted to be true to the â€œmodelâ€.
About the composition
A happy coincidence sparked this imageâ€™s creation in my mind. I photographed this horse in various poses, including the one featured in this painting. The next week, I was at the Denver Art Museum and saw the saddle pad and ornate bridle, also featured. The horse and the equipment went together perfectly in my mind, and I knew I had to create this image.
The composition of this painting is meant to highlight the rider and his horse, shown by having them centered in the image. The focal point is the coloration of the image and the strength of the rider.