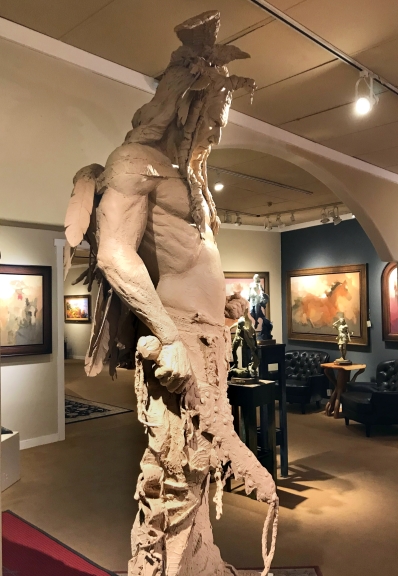 The Crow warrior stands ready for battle. His strong, unmovable stance communicates without a single word that without a doubt, he will be victorious.  As the viewer stands in amazement before this powerful sculpture, he soon realizes that the full story of the battle is unfolding right before his very eyes.
As you examine the very top of the sculpture, it will become clear that he has prepared for the battle that lay ahead. Historically, the Crow would wear an actual bird on their head during ceremonies. In this case, the bird represents his previous internal preparation. He must condition himself mentally, emotionally, and spiritually.
His internal preparation quickly manifests itself into a feeling of conviction; which is expressed in his clenched fist, his unrelenting stare; his weapon and shield…all showing that he will not back down. Take a moment to step back and admire this warrior’s strong, squared off stance. J. Todd Paxton masterfully composed him in this way because he felt that this stance best depicted the battle itself. 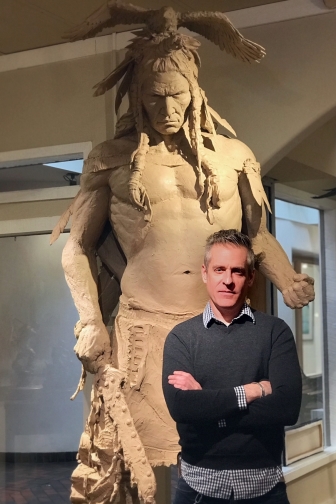 While most tribes put their war paint on before the battle, the Crow would paint their faces after the fact. The color of their faces represented the outcome of the battle; black for victory and white for defeat. This warrior will have painted his face both black and white, indicating that while he was victorious, he had also suffered heavy loss.
We are this warrior. He is an allegory for what we must do when our enemy comes to war. Our enemy may be health, money problems, or perhaps an actual person that we may have to fight. Whatever the case, if we prepare ourselves mentally, emotionally, and spiritually and we are determined to not back down, we will be victorious. We will suffer loss, but we will win the war.
Note from the Director: Telling a story within a sculpture: beginning, middle, end; something that may not make sense until you dive deeper into the meaning and story behind the piece. This is sometimes lost in the creation of modern day sculpture.